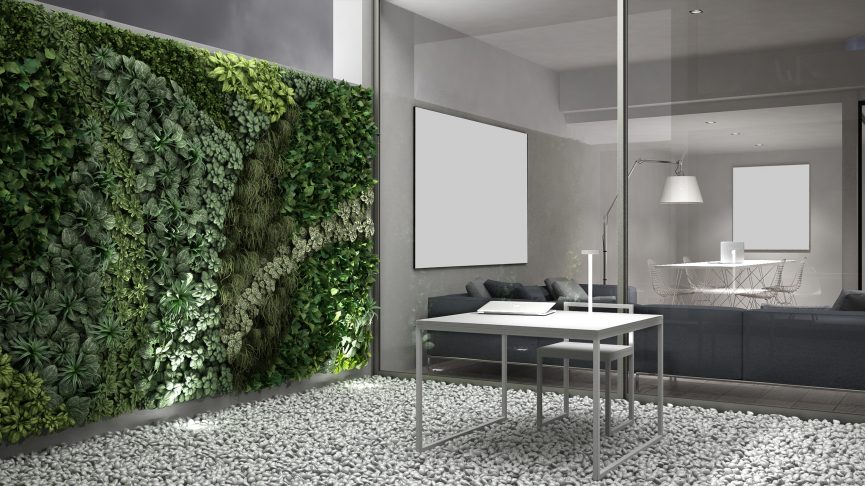 Various studies have concluded that we now spend about 90 percent of our time indoors, and a recent survey of 1,000 office workers commissioned by Ambius found that 35 percent don’t get more than 15 minutes of outdoor time during the typical workday. With many Americans putting in more than 40 hours at work each week, that adds up to a lot of time spent in the office and cut off from nature.

What are the benefits of biophilic design?

Human beings have an inherent need to connect with nature and green spaces. The concept of biophilia, a term coined by American biologist and researcher Edward O. Wilson, describes this innate attraction to nature and natural processes. In response, biophilic design has emerged to lessen the impact of this separation by bringing natural elements indoors in a way that mimics outdoor environments. This trend has grown steadily in recent years, and many signs indicate that we’re on the verge of reaching the tipping point where elements of biophilic design are the norm for the modern office, rather than a curiosity implemented by only the most forwarded thinking office designers.

Major employers like Amazon have bought into the concept in a big way, adding dramatic features like glass-domed green houses to their company headquarters. That said, the average company can achieve the benefits of biophilic design as well through simpler means. Research published in 2014 by the “Journal of Experimental Psychology: Applied” found that the presence of plants inside a building increases occupants’ feelings of well-being by 40 percent. Studies have revealed that adding biophilic elements to offices can increase productivity and reduce absenteeism.

The most common way to achieve these effects is by incorporating large potted plants into the floor plan and smaller potted plants atop desks and file cabinets, but true biophilic design goes beyond simply placing a plants at regular intervals throughout the office. To truly achieve the effect of emulating outdoor environments, a designer might think about incorporating plants of varying heights and textures, scatter plants throughout the space and cluster some together to mimic the random way plants appear in nature. We are seeing many make use of living green walls, moss walls and movable dividers that make plants a vibrant part of the office’s structure. As well as live plants, however, other design features such as nature-inspired art, imaginative use of light and shade and even subtle sound effects and scents can bring the feeling of nature into the workspace.

Aside from the positive psychological impacts that drive the growing interest in biophilic design, there are other benefits to making plants a key part of office décor. When deployed sufficiently throughout an office space, plants can improve air quality and help with noise reduction — a big help in the busy and collaborative modern office. As living green wall technology progresses, systems that actively filter indoor air – some connecting directly into a building’s HVAC setup – can act as a biofilter, optimizing their impact on air quality. Placed strategically near windows, potted plants can help cool indoor spaces by adding shade. Living green walls are also very effective insulators, helping to keep heat out during the summer and retain it during the winter. For office buildings that seek LEED or WELL Building certification, adding biophilic elements can also be a cost-effective way to add points to the overall score.

Biophilia in the office – here to stay?

While offices that feature biophilic design are on their way to becoming the norm, there are many new ideas at the cutting edge of the movement that may become more mainstream in the coming years. Creative new uses for living green walls including experimenting with plant colours, arrangements and additional non-plant materials can add a branded element to lobbies and conference rooms, staging an interesting photo backdrop for the millennial workforce and a powerful visual association between a brand and sustainable décor. For companies that are unable to incorporate traditional living green walls due to budgetary concerns, inadequate lighting conditions or lack of suitable irrigation, moss walls are growing in popularity because they have a similar visual appeal, hold up well in spaces with little-to-no natural light and are straightforward to maintain, saving on costs. Potted ferns are also growing in popularity because they thrive in indoor spaces that don’t get a lot of direct sunlight. While it would be a stretch to refer to all potted plants as a new trend, unique and handcrafted containers provide an opportunity to put a modern, trendy twist on a mainstay of indoor plant design.