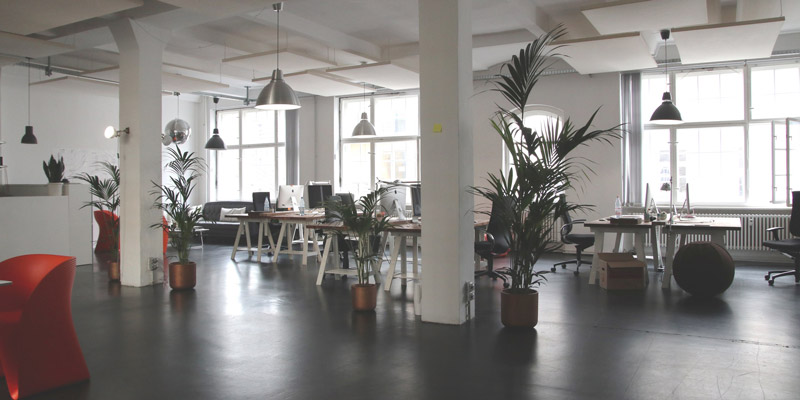 Tim Hanwell at Officeworks reimagines the office through biophilic design to aid in reducing stress and maximising productivity in Part1 of an article recently published in Connect Magazine from Cardinus risk management.

At Officeworks we firmly believe that employers should be embracing a design approach that puts the wellbeing of office workers at its core. Biophilic design can reduce stress, improve cognitive function and creativity and improve our wellbeing. Given that businesses waste millions of pounds each year on lost productivity due to stress-related illnesses, design that reconnects us with nature – biophilic design – is essential for providing people opportunities to live and work in healthy places and spaces with less stress and greater overall health and wellbeing.

Here we look at the increasing influence Biophilia is having on interior design and architecture, explain the benefits of a biophilic design in the workplace and why a growing number of employers are bringing nature into the workplace.

The word biophilia was first used by social psychologist Erich Fromm (The Heart of Man) in 1964. He described it as “the passionate love of life and all that is alive.” The concept was then popularised by biologist Edward O. Wilson in his book Biophila in 1984, in which he describes the innate relationship between humans and nature.

With the emergence of the green building movement in the early 1990’s, links were made between improved environmental quality and worker productivity (Browning and Romm,1994). While the financial gains due to productivity improvements were considered significant, productivity was identified as a placeholder for health and wellbeing, which have an even broader impact.

The healing power of a connection with nature was established by Roger Ulrich’s landmark study comparing recovery rates of patients with and without a view to nature, which concluded that having a window looking out onto plants speeded up the healing process of patients in hospitals. Similarly, having plants in the same room as patients in hospitals also speeds up their healing process.

The last decade has seen a steady growth in work around the intersections of neuroscience and architecture, both in research and in practice; even green building standards have begun to incorporate biophilia, predominantly for its contribution to indoor environmental quality and connection to place.
Most recently, biophilic design has been recognised as a complementary strategy for addressing workplace stress, student performance, patient recovery, community cohesiveness and other familiar challenges to health and overall wellbeing.
With today’s focus on health and wellbeing both at home and in the office it has never been more important to design spaces that inspire, energise and support the people who use them.

How biophilic design is beneficial

A global study into the impact of office design by virtual campaign forum Human Spaces has revealed the full extent of the benefits offered to workers by offices that incorporate natural elements. The study of 7,600 workers in 16 countries found that those working in offices with natural light, good ventilation and plants reported a 15% higher level of wellbeing and a 6% productivity increase. They also found that staff were more likely to feel happy and inspired and less likely to feel bored or anxious when entering a biophilic workplace.
Importantly, the report found that office design was so important to workers that a third (33%) of respondents said that it would unequivocally affect their decision whether or not to work somewhere.

So how does this translate into tangible benefits?

This can be attributed to a variety of factors including but not limited to better air quality, greater sense of wellbeing, improved concentration levels (see below) and/or a greater choice of work settings, including outdoor areas.

A more stimulating workplace allows creativity to flourish, and can be nurtured through the inclusion of features like artwork, wall art and graphics, but also simple improvements like access to natural light (and views of the outdoors), incorporating colour and including natural finishes can also have a positive impact.

All of the above factors play their part in enhancing staff wellbeing, which can have a real tangible impact on the bottom line as absenteeism falls and staff productivity and output increases.

As staff wellbeing levels increases, so too does staff retention which is a key concern for many, if not all companies. Recruitment costs coupled with lost output as new staff members get trained can be substantial. Biophilic office design can help to engage staff and to provide them with a workplace where they enjoy being, and hence don’t want to leave.